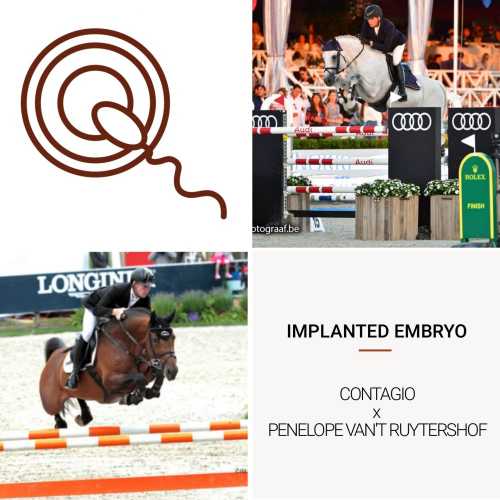 Contagio, the clear-round machine of Lars and Gerrit Nieberg, has more than left his mark on all levels. For years, he jumped with both father Lars and son Gerrit at the highest level and won, among others, the Grand Prix of Frankfurt and the Nations Cup in Uggerhalne. Contagio always wanted to jump clear and was helped by his great canter and intelligence. His talent comes as no surprise. He is a son of Colman, a monumental stallion who has more than earned his spurs in breeding. Colman's offspring are remarkably elastic and jump with power and bascule. It is one of the best devolving stallions of the last decades of Holsteiner breeding. His offspring have already earned more than 2.7 million euros in prize money and more than 145 of his offspring are jumping at 1m40 level and higher. L.B. Convall jumped with Philipp Weishaupt to the top of the legendary competitions in Aachen and Spruce Meadows. Catwalk, Cooper, Con Dios III and Zapria are also resounding names on the 5* circuit. Contagio's dam, Odysee II, is a daughter of the recently deceased Lordanos and Hirana. Hirana is a full sister of Cassius 58, (1m50 with Wesley Heijdens) and is mother of the 1m45 horse Toulouse B. Furthermore, she is closely related to Utopia 48, who was present several times in the prize giving of 5* 1M60 Grand Prix's, of Stardust (1m45), Quainton Labyrinth (1m60) and of Clueso 5 (1m60).

The offspring of Contagio are gradually surpassing the performances of their father. Contagio has only been used very little for breeding, but already a remarkably large number of his descendants perform at 1m45 level or higher. Some of them already broke through on a 5* 1m60 level, such as Best Man II (Henrik Von Eckermann), Contagious (who jumped double clear in Spruce Meadows and is delegated to the Olympic Games under McLain Ward), Con Taggio (Beezie Madden - 2nd GP Wellington and CSIO Rotterdam), Cipetto 2 (Yannick Jorand - 2nd WC Rabat), Cessna 24 (Georgina Bloomberg - 9th GP Wellington), Coby 8 (Philippe Weishaupt - 1st WC Riyadh and GP Stockholm) and Catch Me Imperio Egipcio (Holger Wulschner - 1st GP Wiesbaden).

They are all modern sport horses that stand out because of their intelligence, jumping ability and performance drive. Those qualities can only add great value to one of the world's most legendary dam lines, namely that of Penelope Van 't Ruytershof. The suffix of Penelope already suggests a lot, but we would like to elaborate a little further.

Also grandsons Jilbert Van 't Ruytershof and Pegase van 't Ruytershof are doing remarkably well. Under Constant Van Paesschen, Jilbert jumped among others to victory during the Global Champions Tour in Monte Carlo. Pegase van 't Ruytershof has been the favorite at the stallion competitions and selections in recent years. The son of Comme Il Faut jumped into the limelight several times and is sought after by breeders, which earned him the Young Stallion Award and makes him often referred to as the promise of his generation. No less than 8 of Diamanthina's grandchildren are currently active in the 1m45 and higher classes.

Both the sire and grandsire of Penelope, respectively Comme il Faut and Plot Blue, jumped to enormous successes under the guidance of Marcus Ehning. Comme il Faut descends directly from 2 great names, namely Cornet Obolensky and Ratina Z. During his sporting career, he already jumped to 12 victories at 5* 1m60 level and was allowed to participate in the prize-giving ceremony of a 1m45 to 1m60 high class 87 times.

With Plot Blue Marcus Ehning was part of the bronze team at the European Championships in Windsor in 2009. In addition to numerous Grand Prix, they won the World Cup Final in Geneva and in 2011 followed it up with team gold at the World Equestrian Games in Kentucky. In 2015 the duo said goodbye to the sport under a standing ovation.

Are you already dreaming about coming up with a name for this foal? 'The Best of The Best' might be a suggestion.

This embryo is not insured! The broodmare still has to be paid to the seller, in the amount of 3000 euros, on top of the 2500 euro deposit. This deposit will be returned to the buyer when the broodmare is returned in good condition to the seller.